The cast of Dummer Queens. Photo by David Hooley.

Exciting, loud and high energy with a touch of dystopia, Drummer Queens is an innovative theatrical experience not to be missed.

Featuring a diverse cast of eight fierce female drummers in bright yellow jumpsuits, the performance combines the female strength and empowerment from Six the Musical with the gritty intensity and percussive rhythm of Tap Dogs.

The eight incredible performers, Georgia Anderson, Niki Johnson, Peta Anderson, Salina Myat, Stef Furnari, Lisa Purmodh, Claudia Wherry and Ned Wu, each brought their own distinct persona to the stage. They not only showcased their amazing drumming skills but incorporated dance and acrobatics into their performances too. The result of this was non-stop action on the stage and the audience on the edge of their seats.

The tight choreography and dynamic percussion were perfectly complemented by the vibrant, synchronised lighting design. Throughout the show, the performers interacted with the metallic ladders and scaffolding of the constantly evolving industrial set, doing tricks on it, tapping and drumming on it. Stereotypically, loud, percussive instruments have always been seen as masculine, so it was great to see eight badass women united on stage, rocking the drums and getting well deserved roars from the audience in return. From the opening to the closing number I was completely enthralled by how without any spoken words, the beating of the drums and exclamations from the cast told a story all on its own! Drummer Queens was a total journey, running through many different emotions and rhythms within the show which kept the audience on the edge of our seats all night. Every single one of those women on stage was insanely talented and lent their own personality to their characters and drum playing.

An absolute stand out had to be Georgia Anderson with her fun, charismatic and somewhat dorky character who went from pulling faces and making us laugh one moment to looking like she was leading an army into battle the next.

At the start, set design and costuming lent towards an almost post-apocalyptic world, where the way of communicating is through the beating of drums. The story travelled along with the music, taking many different forms and giving each performer the opportunity to give it their all on stage. At moments playful, mournful, joyful and at other times the drums sounded like the march of soldiers heading deep into battle. 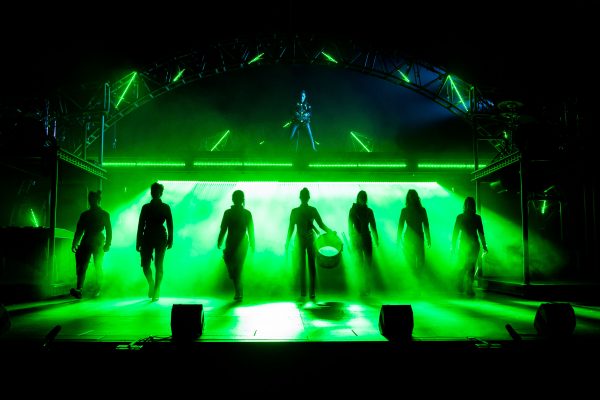 The cast of Drummer Queens. Photo by David Hooley.

The way the cast got the audience involved at succinct moments was fun and didn’t feel pressured or unnecessary. You wanted to join in as if the show couldn’t go on without your involvement. The lighting change around the midway point absolutely blew me away, taking us away from the post-apocalyptic setting to a dystopian future filled with synth-styled drums, vibrant lights and LED drumsticks. The final number was completely masterful and required much detail and finesse from the entire cast, this left me with a feeling of mystery as the light arose once more on an empty stage and finishing with a bang – literally – ultimately left every single person in the audience wanting more.

Overall this show was not only fun, but really showed how you don’t need words to tell a story, that it’s in the presence, connection and pounding of your heart.

Drummer Queens is playing at the Lyric Theatre until February 13. Book your tickets here.