Karis Oka and the cast of FANGIRLS. Photo by Brett Boardman.

FANGIRLS, written by Yve Blake, is an absolute delight from start to finish. Both incredibly funny and genuinely moving, it is a show written with love and empathy. The writer’s clear personal experience with the community and care for the young people whose lives she explores ensures that not a single joke is malicious or cruel, an unfortunate outcome of most attempts to explore the obsessions of teenage girls. Instead, they are actually funny – in fact, hilarious, allowing the moments of vulnerability and sadness surprise the audience, and be unexpectedly touching.

Though clearly a little nervous at the start of the show (and fair enough, with an audience ready to sing along at any moment), the actors quickly warmed up, displaying a variety of skills from the more anticipated singing, acting and dancing to the slightly less expected gymnastics, ribbon dancing, twerking and zombie hunting. Though you may not generally expect a nuanced argument within a musical this funny and full of sick pop beats, FANGIRLS delivers multiple without ever compromising its exuberance; most importantly the ideas both that young women should not be mocked for loving things like boy bands or fanfiction, and giving everything they have to that love; and also that companies and brands should not be using that fact to manipulate them, feed their insecurity and make money.

It is a love letter to young women, to their passion and capacity for love; in all their messiness and imperfections and insecurities it is a story of how, no matter what they do or how they feel, they are enough. It is a show that tells you to never be ashamed of love – it is easy to see why it is so popular, especially amongst young and queer people who are constantly being told they are silly, or just going through a phase.

On top of being extremely well written, the show is chock full of excellent acting, directing, design elements and absolute bops. The actors are incredibly skilled and clearly full of genuine love for what they are doing. Special mention must go to Karis Oka, who led the show with the combination of vulnerability, confidence, excitement, misery, love and bitterness absolutely required of a believable teenage girl, as well as singing beautifully throughout.

Also, particularly touching were her two best friends, played by Chika Ikogwe and Shubshri Kandiah, both balancing stubbornness and softness so well I swear I saw some of my old high school friends on stage (and a little bit of myself too, if I’m being completely honest), and Edna’s mother, Sharon Millerchip, whose performance brought me to tears and made me want to go home, hug my mother tight and tell her I love her. Also displaying incredible range (both emotionally and vocally), was James Majoos as multiple characters, including Edna’s online friend, Saltypringl. The dance routines are fast-paced and fun, the audience involvement as pop-band True Connection’s audience keeps it exciting and brings them into the world. The bright, glittery, flower-crown and beanbag-chair filled set and projected imaged of real teens in their hilariously similar rooms both sets the tone and reminds the audience how very real these characters and their problems are, even if they are fictional. It is a true story so far as it is completely accurate to the soul of the teenagers it follows, and even more importantly, the teenagers watching.

I loved every second, and I know moments and songs will come back to me for years after watching the show – that is how moved and seen I felt as a teenage girl watching FANGIRLS. I will be recommending it to everyone I know. 🙂

It’ll be the best night of your life and leave you literally dead, like actually dead.

On for a returning season with Belvoir Street Theatre, Yve Blake’s FANGIRLS is a must-see show in this post-COVID theatre world. Sharing the story of Edna (Karis Oka) a quirky 14-year-old and her love of Harry (AYDAN) the lead singer of True Connection, Blake takes audiences on an adventure. From feeling as though you are back in time at your concert to sitting alone in your room thinking of how you are so little in the world, Blake has truly found a way to pull on heartstrings I didn’t even know I had. Not only does this story entertain audiences but it further encourages each and every person to rethink their perception of “Fangirls”. Just as a footy fan is allowed to cry when their team loses a game, a fangirl should be allowed to embrace what they love without being ridiculed for it. Through engaging sets, music, characterisation and story, Blake reminds audiences of this and encourages them to celebrate who they are and what it is they love. 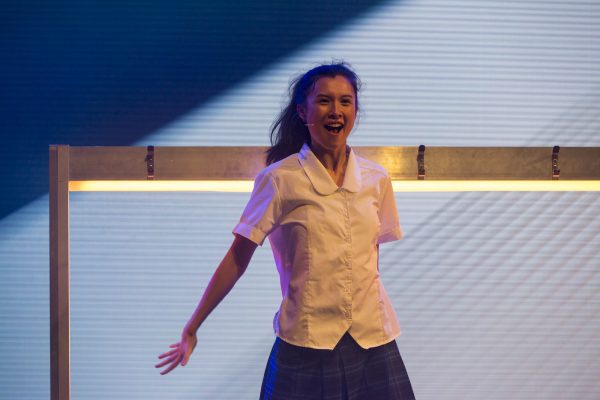 Being a fangirl isn’t stupid, it makes us strong and Blakes story tells it to audiences straight up. This is a must-see show for anyone able to get tickets, whether you are new to the fangirl game or you are a seasoned pro, there is something for everyone in this story.

Belvoir St Theatre’s FANGIRLS is playing at the Seymour Centre until February 20. Book your tickets here.