I’ve never seen or read the original script (uncultured, I know) so I was very excited to see for myself why this Chekhov has stood the test of time. Eamon Flack and the work of all the Belvoir team have just doubled The Cherry Orchard‘s relevance in today’s society.

At first, the adaptation was rocky. I didn’t know whether we were in Russia or Australia but to be honest, none of this matters after the first ten minutes. The superhuman cast sucks you in with each of their entrances and voilà!You are immersed.

I cannot believe the sheer talent of every single cast member, who worked as a gorgeous chorus, ever-flowing and constant in their presence and pace. Each was humble and knew how to yield so we could get a taste of and become attached to everyone. The characters were so well rounded, founded on a glorious mix of comedic stereotype and intricacy. None were like the other yet they all still belonged. And it can’t go without mention how relieving it was to see a cast that actually reflects the cultural and physical diversity of Australia.

Flack and the team are flawless in their comedic ability. I was astounded by the intricacies and lazzi between and along the lines, bringing a fresh, sarcastic, and Aussie spark of humour to the Russian classic.

If you are quirky like me, you will fall in love with Romanie Harper’s set design. Eclectic, staggered and surrealistic, I felt like the cast was playing amongst a piece of postmodern art. Speaking of, the gorgeous oil painting on the back wall needs applause in itself! 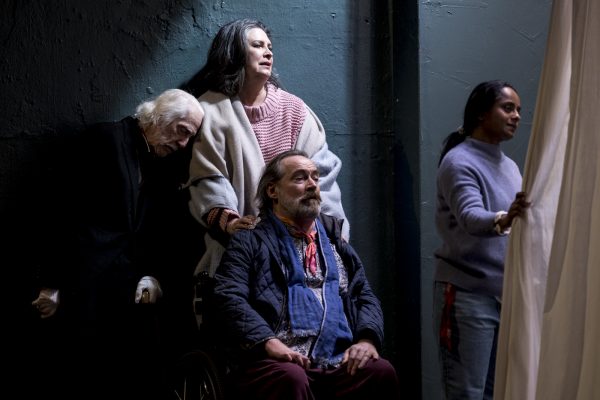 I want to praise Flack’s choice in making Petya female-identifying. It was glorious to see a queer romance emerge from a classic and I personally felt empowered to see an educated, curious character be played by the lively and entrancing Priscilla Doueihy, and for a queer marriage to be encouraged and begged for by Anya’s mother. I’d also like to mention Nadie Kammallaweera, Kirsty Marillier and Pamela Rabe as unstoppable leads. All the women in this play are heroes in my mind.

After all the confetti falls (cue the absolute bop waiting for you in Act 2) The Cherry Orchard ends bitter-sweet. While it undoubtedly feels like a loss, it ends in victory, liberation and conquest. The beautifully written monologue performed by the incredible Mandela Mathia will have you nodding in agreement. I don’t want to give too much away so I’ll sign off for now but… if you watch anything this month, let it be this.

The Cherry Orchard has been under constant debate as to whether it’s a comedy or tragedy, Anton Chekhov himself insisted that it was a comedy, yet the downcast nature of the text is undeniable. The play revolves around a family returning to their old home, with a beautiful, but big, cherry orchard. The plan is to sell the cherry orchard to pay off the family’s mortgage, however, the owner of the land, Madame Lyubov Ranevskaya, played by Pamela Rabe, is having trouble letting go of the past.

The Cherry Orchard was written, and set, in the early 1900s, however, the director, Eamon Flack, puts a modern spin on Chekhov’s well-renowned play. Instead of the actors wearing big dresses and old-fashioned suits, they wear shirts and sweatpants. Making it hard to believe the play was written over a hundred years ago. While some may dislike the change, I found it absolutely captivating. It’s truly incredible how much I related to the characters, and how relevant the writing felt. I doubt I would have felt the same connection to the script if it was portrayed in the past.

This time change not only allowed for one to truly relate to the characters but also created dark and unsettling moments when they would mention happenings and events of that time, such as the freedom of serfs.

The entire cast did a superb job of highlighting the contrasting beliefs and ideals between the characters. It’s rare you find a cast filled with such equal and awe-inspiring talent, yet each actor was fantastic. And every joke was told with spot-on comedic timing. The stage was completely empty except for a bundle of objects to one side, including lamps, rugs, and chairs. The actors were constantly fiddling and playing with the props to keep the sense of movement throughout the whole play. And while the set and lighting were simplistic, it was also very effective.

The Cherry Orchard at Belvoir is an absolute delight and a must-see. The directing is brilliant, the design aspects are intelligent, the acting is warm and absorbing, and of course, the writing is famously good. What a fantastic watch!