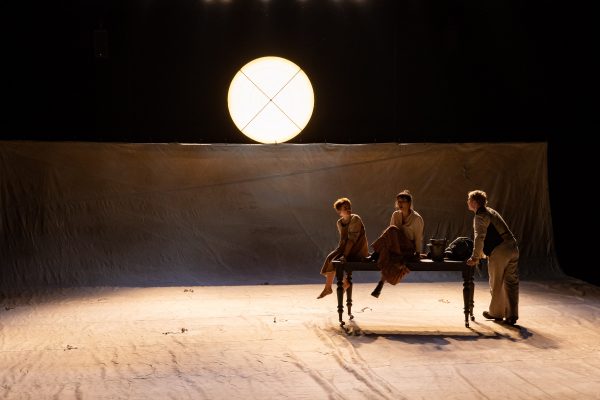 STC has returned to its home in The Wharf with a love letter to a theatre space sorely missed these last few years. Playing Beatie Bow seems to wander from the streets of The Rocks and settle itself inside The Wharf, totally encompassed by the harbour glimmering just outside the darkened auditorium.

In a new adaptation crafted by Kate Mulvany, the classic Australian novel by Ruth Park comes to life here on stage. We follow Abigail, who struggles with the everyday difficulties of young womanhood in Australia, 2021. She has just moved to The Rocks and loathes the overrun tourist hotspots that she feels suck out any real sense of place. When visiting a park with her young neighbour Vinnie, Abi meets Beatie Bow, the subject of a childhood game. The pair are linked and Beatie accidentally drags Abi back to 1873, where we meet the Bow family and are taken on a loving tour of the Sydney we just walked through on our way to The Wharf – but from a time before the iconic harbourside of the Quay was constructed.

Making full use of the new and improved Wharf, Director Kip Williams does not miss a trick, and it seems every scene is built and packed away before our eyes. In the cavernous stage space available, Williams is able to bring to life the full world of the novel on stage. Window frames glide through the space, a suburb’s worth of washing is hoisted into the sky and a ship’s sail unfurls to depict what we imagine to be the foamy caps of a busy Sydney Harbour, Heather Mitchell gliding past in the background with a small ship perched on her head as a hat – a delightfully absurd way to complete the image. 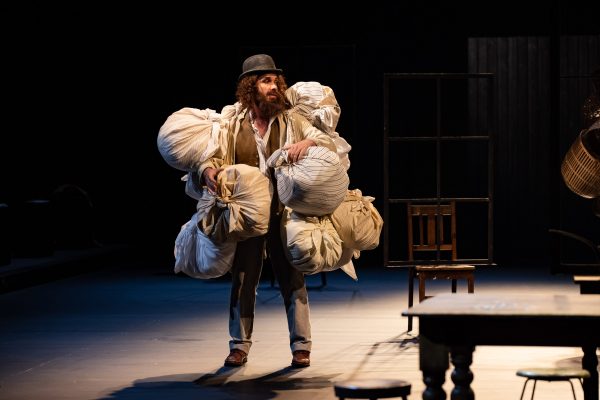 While Mulvany does her best to drag Beatie Bow into the present, its loving portrait of Sydney at times feels a little tone-deaf to the city’s dark history. The addition of Guy Simon as Johnny Whites – a First Nations character not found in Park’s original text – goes some way towards acknowledging the terrible experience of our First Nations people. But as we are asked to celebrate and find joy in what is at its core a White Colonial story of Australia, some moments can feel a little cold. It was with some sense of satisfaction though, that the last reference to the place we were all inhabiting was not as ‘The Rocks’ as we had heard it called often in the nearly 3-hour performance, but as its name; Tallawoladah.

It isn’t often that a play is so holistically transportive that it can take an audience back 150 years to an environment full of truth and believability. Sydney Theatre Company’s adaptation of Ruth Park’s classic novel, Playing Beatie Bow, is the perfect production to reopen their home at The Wharf – an Australian play set in their own neighbourhood, The Rocks. From the esteemed artistic duo, playwright Kate Mulvany OAM and director Kip Williams, the team behind the multi-award-winning stage adaptation of Park’s earlier novel The Harp in the South, comes a new adaptation overflowing with bildungsroman elements whilst retaining a youthful outlook on friendship, young love, and magic. 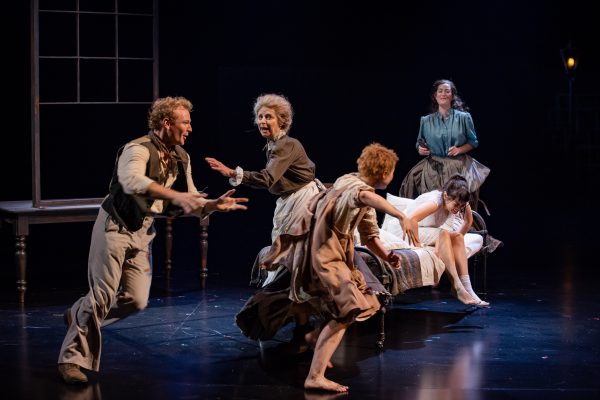 The cast of Playing Beatie Bow. Photo by Daniel Boud.

Mulvany’s adaptation follows Abigail, a 16-year-old girl growing up in The Rocks, who’s transported back to 1873 to the suburb cluttered with immigrants, diseases, and strong Orkney accents, by following the initially haunting presence of a mysterious 11-year-old girl, Beatie Bow. It is her quest to enlist the help of Beatie’s family to find her way home, only to discover she was already there. This production unveils and explores the rich history of Sydney’s oldest suburb in an accessible and contemporary manner.

The cast of 9 share 60 roles between them, with fierce, detailed and witty characterisation carrying the production. Heather Mitchell and Ryan Yeates – the oldest and youngest cast members – were true standouts, with effortless performances that were simultaneously heart-warming and humorous.

David Fleischer’s set design works wonders in bringing to life the essence of time and place, giving the ensemble an immersive environment to allow their performances to flourish in.

Coming into the theatre, I was unaware of the strong elements of chorales that progress the narrative of this production. Through sound design and the choir of actors, the winds and echoes of The Rocks in 1873 formed a multi-sensory experience, woven alongside the visual elements to effortlessly transport audiences back in time.

References to COVID and tacky millennial slang became slighting irritating, however, this wasn’t overused, but did alter the production’s sense of escape.

At the heart of this production is the magic of a legacy of women spanning generations. Kate Mulvany and Kip Williams’ adaptation paid homage to the enticing energy of Ruth Park’s writing, living on within this evocative new stageplay. Playing Beatie Bow is a true must-see that the whole family can enjoy. It’s the best history lesson that doesn’t feel like one at all.

Sydney Theatre Company’s Playing Beatie Bow is playing at the Wharf 1 Theatre until May 1. Book your tickets here.