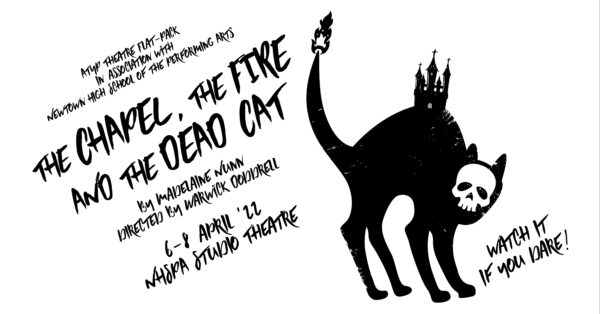 The production of The Chapel, the Fire and the Dead Cat written by Madelaine Nunn was the winner of ATYP’s Foundation Commission (2020). This production is being produced and presented through ATYP’s flagship Education program Theatre Flat Pack and in partnership with Newtown High School of the Performing Arts. ATYP Director, Warwick Doddrell, has been hard at work with the students on this exciting production.

We sat down with them to get their thoughts on being a part of Theatre Flat-Pack.

Do you have a favourite subject at school?
Charles: Either English, Drama or History.
Marianne: Drama and Drama Extension.
Scarlett: Drama, but maths might be a close second.

What’s the best part of studying drama?
Charles: Working collectively with your peers to rehearse and create drama pieces/scenes.
Marianne: Creatively expressing ourselves in this great and fun way. I also love practical activities where we get to create a piece in a safe environment where every person is as passionate and motivated as the person next to them.
Scarlett: When we get to break down a piece of new text and bring life into it and create characters from the clues left within the scripts.

If you were going to write a play about your life, what actor would you want to play you?
Charles: Dacre Montgomery as I really enjoy his acting plus we are both Australian so it would feel more natural seeing him play it.
Marianne: Zendaya as she has the ability to relate to any role and can empathise with a character to give the best and most accurate representation.
Scarlett: Emma Watson, or Sadie Sink.

What part of putting on a play interests you the most?
Charles: Watching actors bring the characters and scenes to life.
Marianne: Watching the production process and how we start with literally nothing except space and have the freedom to become as creative as we wish and produce our desired piece.
Scarlett: I love learning about all the little details that work together to make the bigger picture, as well as learning about the story and the characters, even if the audience won’t see some of the finer details when we perform.

What do you think the hardest part is of putting on a play?
Charles: Making sure everything runs smoothly when performing.
Marianne: Making changes – falling in love with some of your work then needing to change it because it won’t work for some reason is difficult, but very worth it.
Scarlett: One of the hardest parts is to figure out how each line your character delivers is authentic to themself and their objectives. However, when it comes to the final product, it always works out really well in the end.

How have you found the experience of working with a professional director?
Charles: It has been absolutely amazing, everything is perfectly explained and him helping me get into character and to understand Kyle that much more really makes a huge impact on my scenes and the play overall.
Marianne: Absolutely amazing, I have loved working to the best of my ability and being more motivated and passionate working with Warwick, our director.
Scarlett: It has been an incredible experience to work with a professional director as not only will this play be amazing, but the skills we have been taught we can take with us for our future projects.

The Chapel, the Fire and the Dead Cat will be open at Newtown High School of Performing Arts on Wednesday 6 April, 7pm and will perform until the 8th. For tickets and further information, click here.